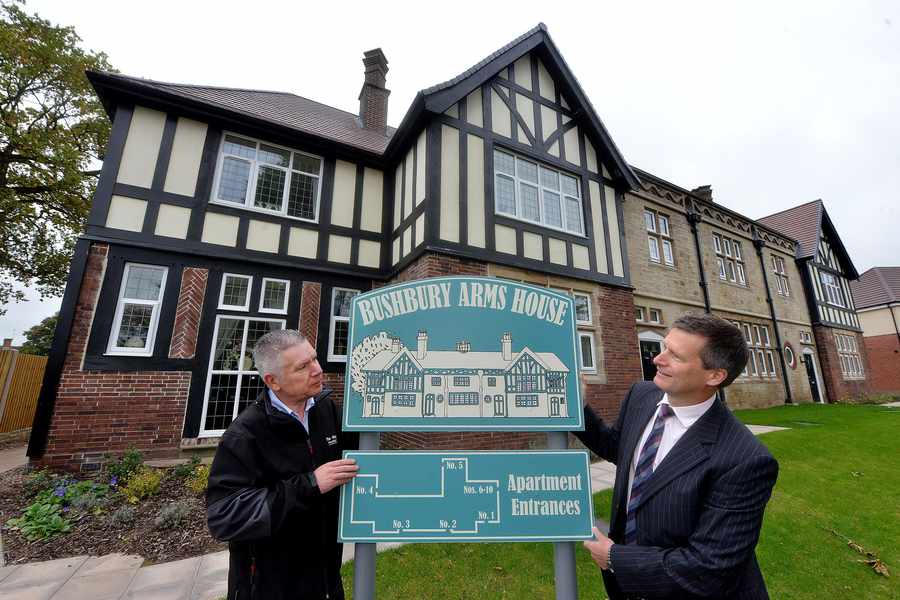 We’re delighted that following a photo shoot last Friday our redevelopment of the former Bushbury Arms public house was featured in today’s Express and Star. You can read the full story below or by visiting the Express and Start website here https://www.expressandstar.com/news/2016/10/11/new-housing-era-underway-at-well-known-wolverhampton-pub/

It has stood in the centre of one of Wolverhampton’s most well-known areas since the 1920s, and now a former pub and listed building has been given a new lease of life.

Brand new luxury homes now stand on the former pub’s car park and gardens as well as ten top-of-the-range apartments within the old pub building itself.

The pub, known as the The Bushbury Arms, was located on Showell Circus, and is a listed landmark building that was built in 1928 and opened in the December of that year.

The Tudor-style roadhouse was extended in 1930 and became listed in 2001. It was the site of many dances in the assembly room during the 1930s and was the work of architect Mr Hutchings of Springfield Brewery. 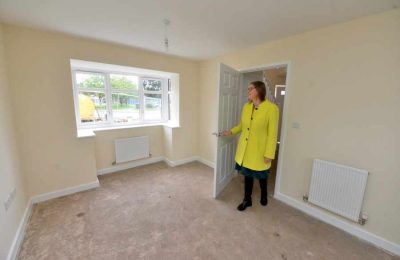 It closed as a public house in mid-2013 and was boarded up. Then, over the Christmas and New Year period in late 2013 there was a serious arson attack on the building which devastated the building and its grounds.

The fire ravaged the bar of the former pub, just weeks after the nearby Strykers bowling alley had burnt down.

In April 2014, housing developer Wonderful Homes purchased the derelict building as well as the overgrown former pub gardens and car park with a view to redeveloping the site for housing. 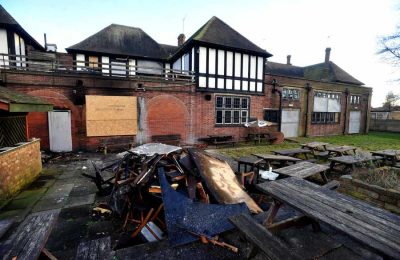 Now, the building has become the site of 38 new affordable homes, which are available through housing association, The Wrekin Housing Trust.

They will be managed by the Bushbury Hill Estate Management Board, based on Kempthorne Ave.

Chief housing officer of the Bushbury Hill Estate Management Board, Bill Heywood, said: “We’re delighted with the development because it has saved a much-loved local landmark by transforming it into homes for local people.

“A total of 17 of the homes have gone to local people from Bushbury.”

Andy Evans, managing director of Wonderful Homes, said: “It was really important for us to respect the original building’s features and character.”

“It would have been easier and cheaper to knock it down and start again but that’s not something we wanted to do at all, and it certainly wouldn’t have sat well with me.”

“I’m very proud of what we have achieved at the site, and hopefully the standard of the homes will compensate for the loss of the public house, which I know many people have fond memories of.”

The new apartments and houses at the site include: the conversion of the pub building itself into ten, one-bedroom flats, with four one bedroom flats on the former pub gardens and car park.

There are also two, four-bedroom homes there as well as 23 two-bedroom homes. Already the housing association has handed over the keys to 35 of the 38 dwellings, with just three houses remaining to be handed over in the next couple of weeks.

Steve Swann, development manager for the housing Trust said: “We’re delighted to see this development complete. Our partnership with Bushbury Hill Estate Management has helped us to provide 38 quality, new, affordable homes for local people. The homes are a great addition to the area.”

We buy land with and without planning permission across the West Midlands and surrounding counties.